The cypherpunk movement and David Chaum

The dream of digital cash is not a new one. Within the Cypherpunk movement this topic has been discussed since the eighties and already in 1982 David Chaum published his article on blind signatures, which made it possible to achieve something close to digital cash. Chaum's system made it possible to transfer value anonymously between people but a third party was still needed to act as the issuer and to make sure that money was not double spent.

With his followup piece 8 years later another step was taken which allowed for transactions offline. Double spending could not be stopped immediately but if someone tried it this person could be identified afterwards. As long as you did not double spend you did however remain anonymous.

Based on these ideas David Chaum founded the company DigiCash that grew over a few years, roughly around the time that internet became a household phenomenon. American Banker wrote that the Swedish Postal Service bought a license to use the system but I am not aware of any project that was actually released to the public. The company did not get the commercial success that they had hoped for and DigiCash went bankrupt in 1998. 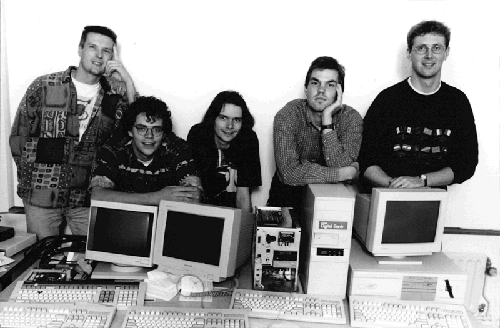 Even if Chaum's DigiCash could be called digital cash it was still cash issued by a central authority. Among the cypherpunks principles were the right to anonymity but also the absense of censorship, and to be free from censorship a decentralized system was needed. The first concrete ideas for decentralized digital cash came from Wei Dai in his 1998 publication "B-money". Wei Dai was the first person to suggest proof-of-work as a way to create money.

The idea was not completely new since Adam Back had already used this principle in Hascash, but Hashcash was (despite its name) presented as a way to stop spam, not as digital money. In order to send an e-mail you had to attach a proof that your computer performed some type of work, something that wasn't a problem for single e-mails but would be expensive for spammers.

B-money had many of the pieces of what would become Bitcoin but it wasn't complete. Proof-of-work to control inflation, signing of transactions and the decentralised database is there, but the description is not detailed enough to make it actually work.

Nick Szabo is the one who coined the term "smart contracts" and is a well known character in the cyperpunk movement. In 1999 Nick published a draft of Bit Gold and this is the first time that we actually see something that resembles a block chain (or at least that is what it sounds like):

The bits which are the solution to the challenge are added to a multiparty hash chain (i.e., they are securely timestamped)

Still, Nick's proposal is missing a few pieces needed for a complete, decentralized solution. His idea of a distributed property title registry where the ownership of bit gold will be stored does not solve the problem of Sybil attacks (i.e. where someone could create lots of nodes in order to gain more power). In 2005 Nick wrote about Bit Gold and perhaps that is where the inspiration for what will show up 3 years later came from.

On August 18th, 2008 the domain name bitcoin.org was registered and November 1th that same year someone called Satoshi Nakamoto posted a message on a cryptography mailing list that began like this:

The bits which are the solution to the challenge are added to a multiparty hash chain (i.e., they are securely timestamped)I’ve been working on a new electronic cash system that’s fully peer-to-peer, with no trusted third party.

The paper is available at:http://www.bitcoin.org/bitcoin.pdf

The message can be read in its entirety here and the link to bitcoin.pdf still works. Satoshi is received mostly by scepticism, perhaps because it seemed so unlikely that someone would have cracked the puzzle, especially someone that nobody had ever heard of. But Satoshi is not just a theorist and will also show a working system in practice.
‍
Two months later Satoshi created the first block in the Bitcoin blockchain and you can se what it looked like here. In addition to the generation of the world's first 50 bitcoins the block also contained a message: ”The Times 03/Jan/2009 Chancellor on brink of second bailout for banks”. The message referred to an article in the British newspaper The Times that same day and therefore proves that the block had not been pre-generated (which is important as it means that Satoshi could not possibly have generated a lot of blocks before anyone else).

Six days later, on January 9th 2009, version 0.1 of Bitcoin was released and announced on the same mailing list as the previous message.

Announcing the first release of Bitcoin, a new electronic cash system that uses a peer-to-peer network to prevent double-spending. It’s completely decentralized with no server or central authority.

Not much happened during the first few years of Bitcoin's existence. It took until December 16th before version 0.2 was presented (here) and it seems to have given the project a bit of a push as the first difficulty adjustment came only two weeks later.

On May 22nd 2010 Laszlo Hanyecz bought two pizzas for 10,000 bitcoins (!) This is generally considered to be the first business transaction using Bitcoin.

On July 7th 2010 Bitcoin version 0.3 was released and when a message about this was posted on Slashdot a large number of new users found out about Bitcoin. The rest is history.

This is the Swedish e-krona

Bitcoin without the Internet

Trezor One vs Model T

The price of Trezor One has been lowered so that it is the cheapest hardware wallet on the market. We compare it to the more expensive Model T.
Läs hela artikeln ⟶
Slide
More articles ⟶